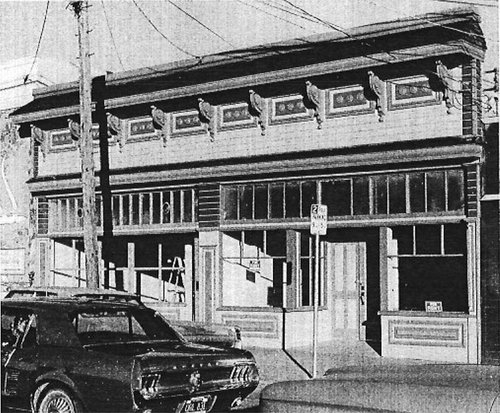 Bakeries were located in the Valley since its pioneer days. In 1849, Mathias Purcell's Bakery wa.c. founded in the mid-block of First street East. Joshua Chauvet owned a bakery in Glen Ellen or Sonoma.

By December, 1886, the German Bakery and Coffee House had opened on the East side of Broadway, just below Napa Street, Wagner and Weitz were the proprietors. In 1887, Otto Wagner was in charge and during the following year, August Schweikhardt became the proprietor. Pete Kiser still remembers the German Baker's excellent baked goods and candies from his boyhood Scbweikhardt was in poor health and forced to retire in 1917. The Schweikhardt Building stood on the site of the later Friberg's Drug Store. Its facade has been replaced, recently, with an old-looking store front.

Cottage Home Bakery in El Verano was operated by the Ammann family during the same period,

Buena Vista Home Bakery, run by Luke. A. Roth, provided "6 different kinds of health bread" by 1916. They were sold at Duhring's on First Street East

When the Sebastiani Building on First Street East was completed in 1933, Willett's Bakery was located in the Northern section and remained until late 1935. Then the Gordon family leased the space and opened a combination candy store, soda fountain and restaurant. Several restaurant operations followed until the Sonoma French Bakery was established in 1957. This bakery remains a major Sonoma attraction.

C. Stoll and Son opened the Sonoma Sanitary Bakery in the former Sprouse-Reitz section of the Maffei Building on West Napa Street during October, 1940. Danish pastries, raised and potato doughnuts, cakes, cookies and rolls were sold. Cream puffs were five cents, lemon meringue pis were twenty-five cents and you could eat them on the premise.

Stoll remained until 1950.  Later, A. Cristophel managed the bakery.

In the early 1970's, two sisters living in Glen Ellen, opened a bakery in the newly created "Jack London Village" on Arnold Drive.  Soon, they were lured to Yountville shopping complex.  Their bakery became famous as "The Court of the Two Sisters" which they moved to San Francisco after a few years.  Sonoma Valley lost these superstars!

A new kind of bakery business which was new to the Valley opened in the late 1970's.  Sonoma welcomed its first bagel factory, Home Grown Bagels, which is still on West Napa Street.

Short History of Bakeries in Sonoma

In response to your inquiry about the Schwekhardt Bakery on Broadway in the late 1800's, I called a couple of 90 year olds!  I called Rose Millerick, who is Sylvia Sebastiani's surviving sister, and Josephine Morenzoni, who worked for my mother in the Sonoma French Bakery's store for about 20 years, until their retirement in 1989.

My father, and Josephine remembered that in the late 1930's, there was a German bakery by the name of Stohl's Bakery, located on the north side of W. Napa Street, between 1st St. West and 2nd St. West. It preceded the Sweet Shop, owned by Helen Fernandez.  Josephine worked at Stohl's while going to high school. It was run by a father and his stepson.  Josephine was married in 1946, and Stoh's made her wedding cake.  I think they said it had closed up by the 1950's.

In the 40's there was a French bakery on the West side of Broadway, located in the building that now has the yogurt shop in it, kind of near the Sonoma Valley Museum.  The bakery was run by the Dutil family.

The Dutil's sold it to the Cossi family (Italians).

The Cossi's left, and Santa Rosa's Burlington Bakery ran it as a satellite shop from their main store in Santa Rosa for a while.  Then it too, closed.

At about the same time, the Bertolotti brothers, Pio & Puccio, had a bakery at 127 E Napa St.  Pio committed suicide by shooting himself, and his wife leased the business to Izzio Mangiantini.

Izzio Mangiantini later sold it to Dominic Carafa.  (Somewhere along the way here, it became known as the Pioneer Bakery).

About 1957 or so, the Guerra's moved to the Sebastiani building, at 460 First St. East. (The health inspector told them that the Bertolotti building needed many upgrades, including new floors.)

The Guerra's left behind the Pioneer name, and started the Sonoma French Bakery.  They had new gas brick ovens installed, called Portable Ovens, by a German man from Oakland, Paul Metz.  The ovens cost, at that time, $6,000.00.

When the Guerra's left Pioneer Bakery, Izzio Mangiantini's brother, Ernie, leased the Bakery from Mrs. Bertolotti, but was forced to close it after a few years.